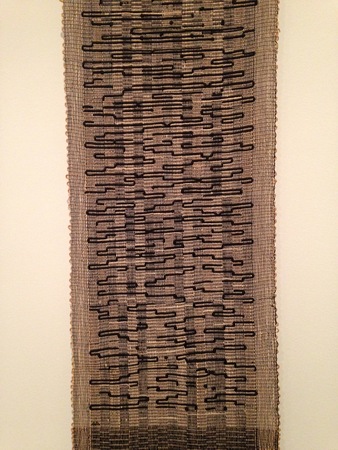 This week I seem to be thinking about art that thinks about writing.

I spend a lot of my time thinking about how to write about art. A reversal is interesting: how art considers writing.

Earlier this week, I looked at Tara Geer, and at Alberto Giacometti, both of whom use line in ways that think about writing. Today when I woke up what was in my mind was Anni Albers Study for Six Prayers, IV, which I saw a few times at the Art Institute last fall, in their Weaving Beyond the Bauhaus exhibition.

Going back through my photos, I was able to find four, and none was of the entire work. So here is the whole Anni Albers Study for Six Prayers, IV as offered by the Art Institute’s website.

I am grateful for the skill and nuance of the museum’s photographers, but I burst out laughing when I saw this. I am used to how poorly paintings reproduce, but have given little thought to the problems for textiles. I think I will have to do some work to restore the experience of looking at it before I can think about its ideas of writing.

It is 77 and ¾ inches long and 19 and 7/8 inches wide. So taller than a tall person and narrower. But in presence near to a person. When it is mounted a foot or so off the floor, you look up for the encounter.

I saw the title soon after I saw the work, and can no longer remember first associations independent of the title, Study for Six Prayers, IV. So, a sense of the sacred, and also of levels of devotional work, not just the prayers, but studying for the prayers. And a sense of the piece ramifying outward – there would be others, perhaps five other prayers, at least three other studies – a hanging wall of related considerations. This gives a breadth, like seeing one column and thinking of the colonnade. 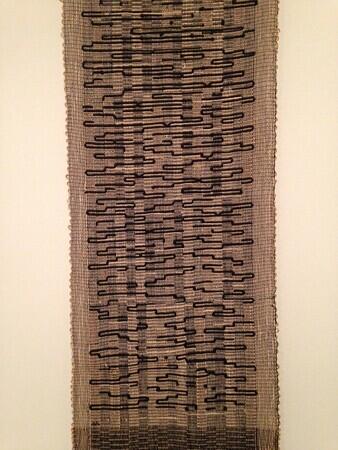 How to be specific about texture. The materials themselves will give some sense: linen, jute and rayon. From the linen, the sacramental sense, fineness to go with certain seasons, certain occasions, a stand-offish fabric that holds true even around bodies that are diffuse in heat or sleep. From the jute, a coarse fibrousness, like a jute bag, a sisal rug, but here, with immense skill, held close and made extremely fine. From the two together a sense that the piece would not be soft to the touch, but upright, a little stiff. And, unlike a bag or a rug, complex to the touch, many close sensations, that each stitch would have a sheen to it. 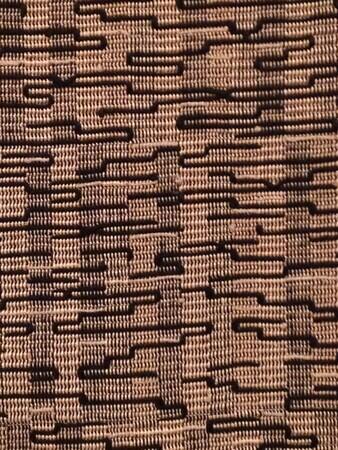 I’m not sure if the black lines that pattern the center section are in rayon. My memory is that the lines overlaid the weaving, but when I zoom in on my photographs, it seems that the black is recessed. Questions I cannot answer. 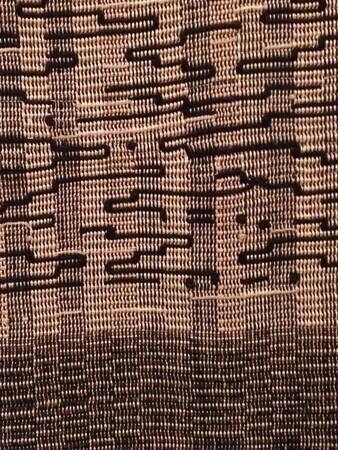 The times I saw this work, and all the times I have thought of it, the word rune comes to mind. Ancient runes. The sense of a very old script used for a religious purpose. Tracing the script perhaps in itself a devotional rite.

Study for Six Prayers, IV was made in 1965/66, five years after the Giacometti portrait that I looked at yesterday. The second world war had a particular definiteness. I don’t remember now if the wall text made specific mention of a connection to Judaism, but I had held a sort of intuitive sense that this was a mourning piece.

The internet is always ready to concretize and empty fleeting intuitions.

[The piece was commissioned by the Jewish Museum, to commemorate the six million Jewish dead in the Holocaust. Anni Albers was Jewish, from a secular, wealthy family in Germany. There were in fact six panels, Six Prayers, for which this one was a study, and all were recently hung together at the Tate Modern show of Albers work, in what looks to be a room of great power. An article in the Telegraph, linked below, itself links to a podcast about the panels, which I have not listened to.]

I’ll try again to concentrate. What the reflections of this work are on writing. That the written word has a power of evocation and continuity. That prayers are in words. And we know this, so that we specify wordless prayers when they happen. That words repeated with small variations make a ceremony, or a ritual. That we are not sure whether the dead write, but their language does seem to come through to us. 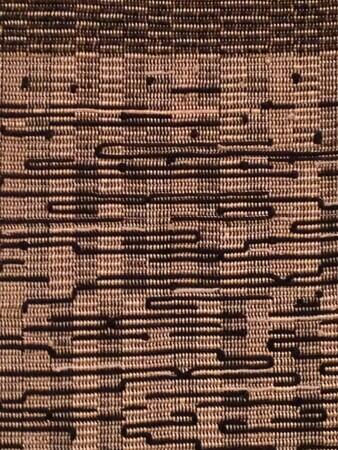 Looking closely, I notice the dots close to the upper and lower borders. These seem significant. As preliminary marks that will be joined together into the script, or as punctuation? A beginning, or an ending – the arising, or the completing.