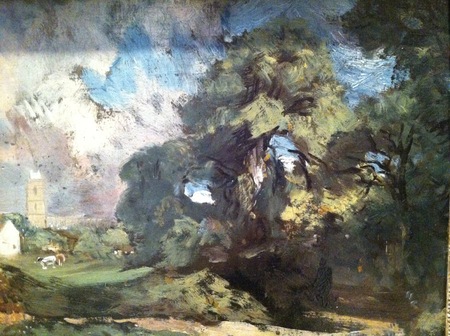 Here is a tree. A tree in Stoke-by-Nayland with the church of St. Mary the Virgin behind it. Constable’s aunt lived nearby, and he painted several versions of this scene. But this is an oil sketch, made in 1810 or 1811. In his oil sketches, Constable moved with great freedom. 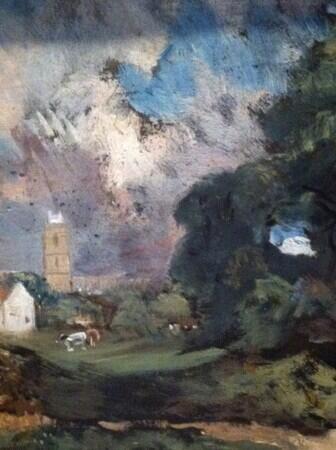 At the time when Constable was in Suffolk, at his aunt’s, sketching, Jane Austen was at work to the south and west. In 1809, Jane Austen and her sister Cassandra and their mother settled at Chawton Cottage in the village of Alton, on the edge of the South Downs. Austen began to rework the two most complete manuscripts she had drafted more than a decade earlier. In 1811, she had her first publication, Sense & Sensibility.

In Sense & Sensibility, Elinor and Marianne Dashwood take many walks in the area they move to after the death of their father. Their house is called Barton Cottage. It is in Barton Valley, and, when they first arrive, they are very pleased by the countryside:

The situation of the house was good. High hills rose immediately behind, and at no great distance on each side; some of which were open downs, the others cultivated and woody. The village of Barton was chiefly on one of these hills, and formed a pleasant view from the cottage windows. The prospect in front was more extensive; it commanded the whole of the valley, and reached into the country beyond. The hills which surrounded the cottage terminated the valley in that direction; under another name, and in another course, it branched out again between two of the steepest of them.

Landscape comes through with beautiful clarity in Austen’s sentences; she begins with solid nouns and the rest unfolds. The walks the Dashwood sisters take over these hills, open and woody, will determine much about their future. 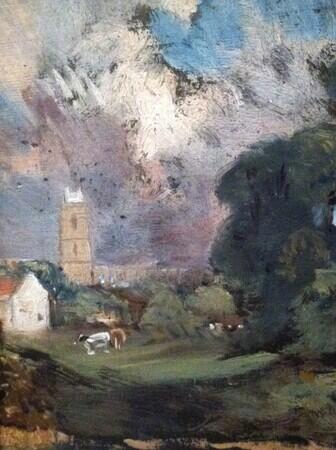 This oil sketch of Constable’s is at the Metropolitan Museum in New York, and I used to make a regular visit to look at it. It’s quite small. Under the tree, there is a figure, looking. In large paintings that Constable made later, perhaps partly based on this sketch, the figure has become a woman, whom the museum text says was dressed in white and carried a bundle with bright colors that would make her noticeable. 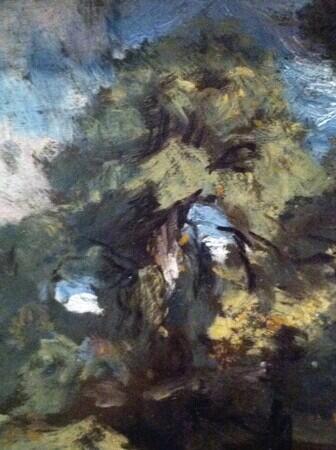 You may just be able to make out the figure in the lower right corner, but you will see it when you return to the whole below. In the sketch the figure is not part of my view, but a noticing figure, whose dim outline I can join, to stand under the spread of the tree, and look at the church, the dense glory of the clouds. 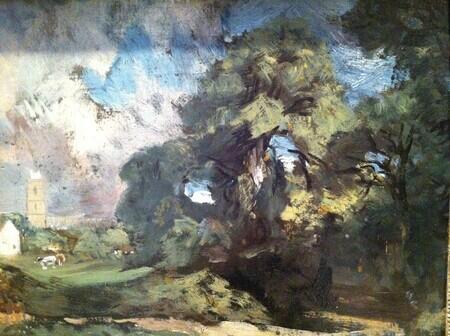 A book I have written, about living with the novels of Jane Austen for many years, is published today. Austen Years: A Memoir in Five Novels. It is a delicate pleasure to remember this Constable sketch, to think of the landscape of England in 1811, and of the Dashwood sisters venturing out.