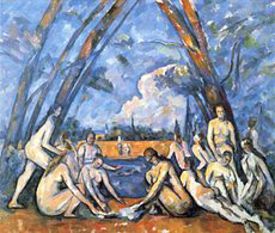 Since my father’s death I’ve been twice to look at the Cézanne Large Bathers that our museum has borrowed from the one in Philadelphia.  I might have gone more often but with the baby there hasn’t been so much time.  It’s a vast painting – eight feet high and nine long.  The wall text says its vault of tree trunks makes a cathedral and this is right, not merely architecturally.  These tree trunks, along with a general impression of blue, and the gathered naked bathers, are the things you’re aware of before you know you’re looking, and the trees – four major lines on the left, two which join on the right – organize the space and direct your view.  The groups of people are at ease because they are gathered under and near the trees; the relationship of the figures – to the ochre ground, blue of water with swimmer, huge blue leafy cloudy sky – makes sense because of the curved, triangular view through the trees.

One of the things your eye is drawn to, small in the distance, is a church with an oblong blue roof over the main building, and a little higher, a triangular blue over its steeple tower.  When I first saw this pair of roofs I thought they were one very beautiful shade of perhaps a cobalt blue.  After I had been looking at the painting for some time I realized that the roofs incorporated many shades of blue.  This was so obvious that I was quite surprised by how definite my early impression of a singular shade had been.  I already knew that the relationships among colors take time to see in paintings, but I hadn’t realized before how dramatically an impression of an individual color can change.  In studying the painting, I had been acquiring subtleties of comparison and distinction, a general blue was becoming various enough to give me back figures, water, distance, sky.  It was all there from the first, but I didn’t have enough experience to see it.