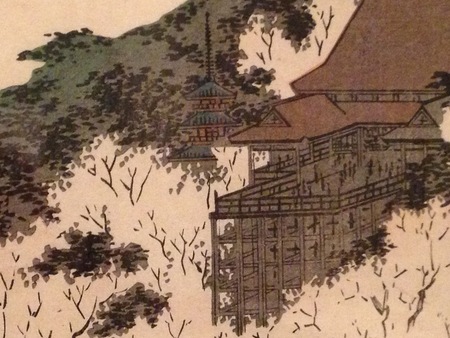 In December of 2019, I went to New York for a few days and various reasons, and I went twice to the Metropolitan Museum of Art. I was covering their show Kyoto: Capital of Artistic Imagination, for which they had reinstalled their Japanese galleries with works from their permanent collection that partake in the long Kyoto tradition. Kyoto was for many centuries the capital of Japan – this capital was eventually shifted to Edo, which is now called Tokyo. The two cities were connected by a famously beautiful road, the Tokaido Road, and many artists traveled along this road, making some of the fifty-five stops along it and recording the views of temples and natural wonders.

This morning, I thought I would like to write about a set of four abstract Joan Mitchell paintings called “La Vie en Rose,” painted in 1979, which I had looked at while at the Met. But when I went to look at my pictures I couldn’t bear the tones – pale rose, white, lavender, black. Some other day they will be wonderful again, but not today.

Most of the other pictures were from the Kyoto exhibition, and I idled around in them for a while. Then I came upon three that I loved. 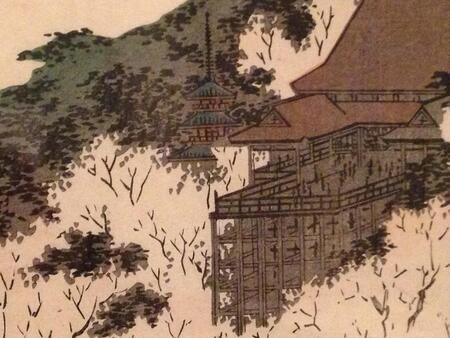 This was the tonality of this morning. It was gray out, there was a dull feeling of undertaking the routine again. I loved this brown, the way in one area it was blue-infused, and in the others combined with the under-green, like something from a pine woods. I loved the buff-colored space that had been left open in areas, the pieces of olive-gray that formed and scattered.

I was pretty sure these fourth and fifth photos were of the same print, because of the open spaces, the way the branches lifted across them, the palette of gray, and this yellow that made sense. 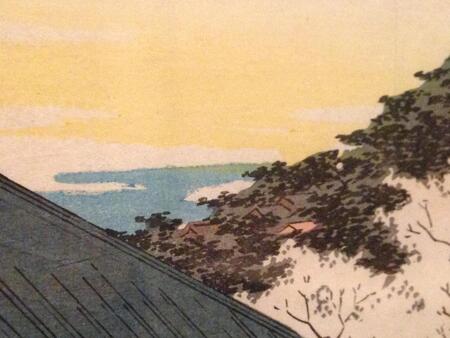 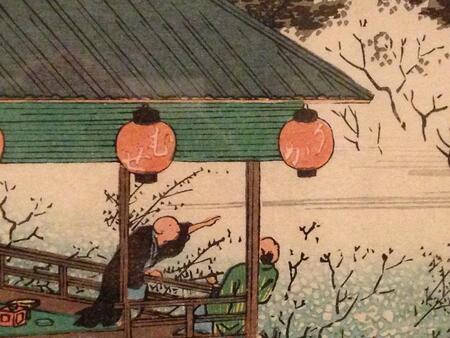 They were from a woodblock print that had been on the left-hand wall of one of the last galleries, among several, all by Hiroshige, each one under glass, with a glare, and quite hard to photograph. I had taken a few hurried shots on the first visit, and when I returned had forced myself to slow down and try to get better photographs, slightly from the side. I always photograph the wall text at the same time, so I know what my images are from, but hadn’t, on the second visit. So I spent a precious forty minutes combing through the 745 Hiroshiges that belong to the Met. Who knew they had so many. In the small thumbnails, blues were most apparent. I was skipping blue, though, looking for gray-brown with some under green, some yellow in the sky. Finally it occurred to me to search for Hiroshige and Kyoto, and I found it. From the Metropolitan Museum of Art: 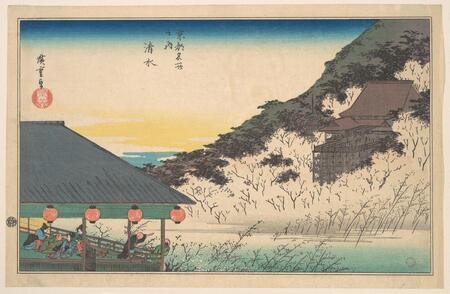 It would have been easy to have looked most at the veranda and the larger figures, but I had loved the distant view, which is in the work's title. Kiyomizu Temple (Kiyomizu), from the series Famous Views of Kyoto (Kyoto meisho no uchi), ca. 1834. The reproduction from the Met is clear, and if you go to their website you can zoom in and get details and it’s quite nice. But, it does not have the warm tonality I love in my own pictures, which I believe really are closer to the original.

Utagawa Hiroshige (1797-1858), who lived in Edo, went several times to Kyoto. He made the trip along the Tokaido Road in 1832, and made several sets of prints about Kyoto.

The people on this veranda are looking across to the distant temple. They point, and, looking again, I can make out small ink lines of figures in the open space of the temple. These other lines of figure seem involved in their own observance, but perhaps a few are looking in turn at the figures we stand close to.

I realized that I couldn’t locate this detail, the one that had first caught my eye, whose blue seemed the necessary counterpart to the pine green of the others.

It must be in the print, the foliage so similar. But a little bit of writing lifted in the sky above couldn’t be made to fit. Another print then. More searching. Ah, the one that had been next to it. The Great Bridge at Sanjo, ca. 1847-52. From the Metropolitan Museum: 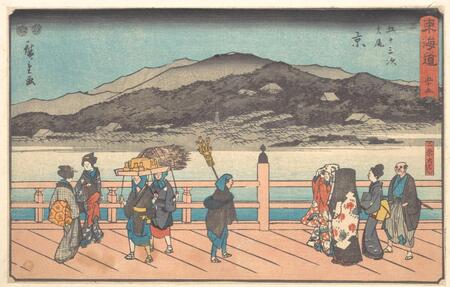 That was the end of the Tokaido Road. I had also taken this detail, of two working women carrying firewood. 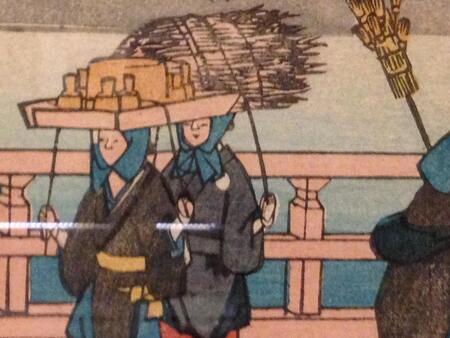 When looking back through, I had amalgamated the buildings near the edge of the hill into the other print.

Fifteen years separate the two prints. In the Met’s reproductions there is not even a hint of brown in this later one, all is a slatey gray. But, because of a few accidents of juxtaposition and elision in my own records, I felt the details from the two prints were united. I can see how the artist might have thought of that earlier view across to the temple as he and his printers worked at this plate.

Out my own window, the tonality has changed entirely, sky now blue-white and branches lit from the sides with April sun. It was a frustrating little bit of morning, but I learned something about brown and its relationship to green, to buff, to olive. The yellow and blue in the sky matter, even though I could only see the tonalities I wanted when they had been set aside.