It is Earth Day, and I want to think about the earth’s time.

My colleague Kathleen Blackburn, who writes about the environment and works with the Fresh Water Lab at the University of Illinois, has drawn my attention to a book I have been thinking about without yet having read, Rob Nixon’s Slow Violence and the Environmentalism of the Poor. The thought is that we can understand and respond to crises with an immediate time horizon, but that we have a very hard time acting as if, even perceiving that, we’re in crisis when something is prolonged.

This is one of the many aspects of this very strange sheltering season where it is possible to see deep connections between our responses to the flu pandemic and our environmental consciousness.

What is a slow crisis – and what kind of sensory perception and intellectual clarity do you need to attend to it?

I started looking at Poussin because Roger Fry thought his paintings were wonderful, and I thought Roger Fry, especially his book on Cézanne, was wonderful, and I had never liked Poussin’s paintings at all, found them strange and, with their often mask-like faces and statue-frozen physical poses, even a bit repellant, and I thought if Roger Fry was so into them, and I disliked them so fervently, there must be something there and I would take the challenge. It was probably competitive, to be honest, if this was the most difficult painter, damned if I was going to be left behind. 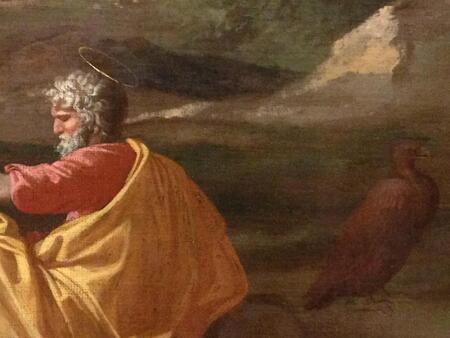 Around 2005, I had cobbled together enough money to stop working for a few months, and to go to Paris, and I went to the Louvre every week. It took most of that time, but eventually I got it. And then it was just like it so often is when you ruefully look back at your former self – it wasn’t so hard really, it just took patience, practice, letting go of certain assumptions, being a little simpler, more tender, growing up a bit. 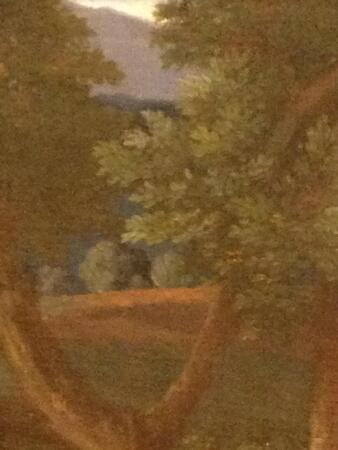 They are learned paintings. Carefully built around stories from the bible and classical literature. Set in idealized landscapes that combine layers of history in the way Rome itself does. Poussin spent most of his career painting in Italy, which is how he got qualities of light that the French love but usually can’t do, though Cézanne could get close, by living in the South and looking a lot at Poussin. 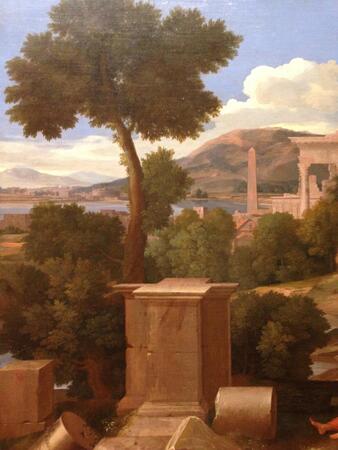 The light may be one way in.

For me it was the greenery, and the great self-portrait at the Louvre, which I’ll show, even though I have no photos of my own. 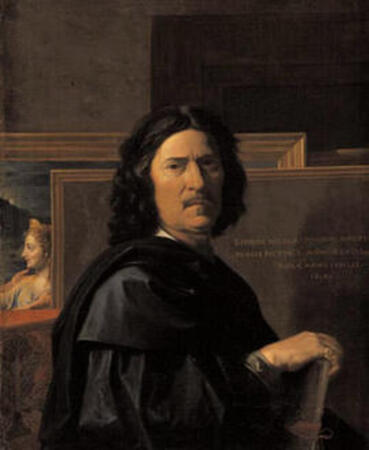 I spent so many days standing with this painting. He came to be a living person for me. I believed in the expressions of his face, that he had the depth of human knowledge that I saw there. I used to imagine him looking through the eyes of his self-portrait at the gallery of his paintings at the Louvre, and that helped me, too, to imagine what he might have wanted from paint.

The heroic and tragic paintings set in cities took the longest, and I still sometimes get repelled by them. But the landscapes, oh the landscapes.

After that, to see a Poussin was always a beautiful day, a banner day. I lived with the ones at the Metropolitan Museum of Art in a prolonged way, years of weekly visits. And then came the great show at the Metropolitan, which defined Poussin for a generation, Poussin and Nature: Arcadian Visions. This was the chance of a lifetime. Poussin thought about the human relationship to the landscape. He already knew what we now understand: that there is no landscape on earth that is independent of human life and perception. And that if you take a long view, holding many layers of history in mind, you get a different kind of visual perception, and that you can then act differently, move differently. 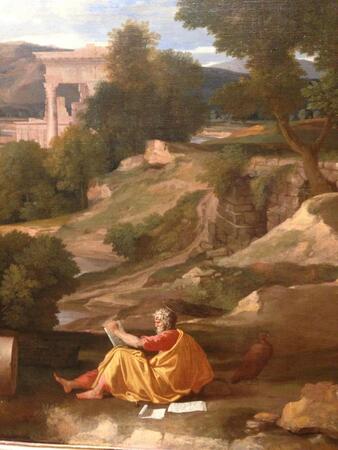 When we moved to Cambridge, it was like a gift from the gods that there was a great, very late, possibly unfinished Poussin at the Fogg Museum. By then I was taking photographs of art, and I took so many photos of it that I learned to photograph Poussin. You don’t want it too sharply in focus, or it becomes like an architectural model, all the layers built out of plywood and all the artificial trees poking up.

When we moved to Chicago, I went right away to see the Poussin that I had already often visited at the Art Institute, of St. John on Patmos, with the eagle who was the symbol of his gospel.

My favorite news stories in this time are the ones about the animals coming into the centers of cities. Sea lions near shop windows in Argentina, deer in Nara, Japan, mountain goats on city streets in Wales, herds of buffalo walking down highways in India. There are coyotes on the streets of Chicago.

This season, we are seeing what the earth looks like slowed down.

Poussin would know how to paint this.

There are eagles just behind us. 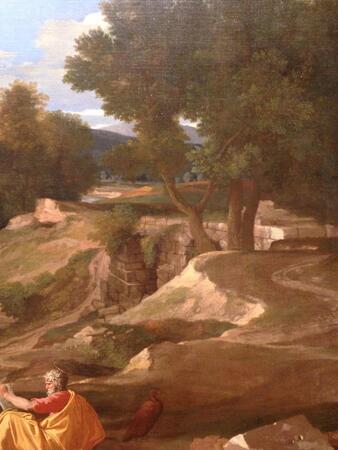