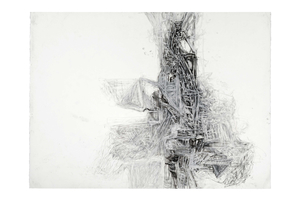 One way to begin is just by quietly trying to notice things. In “walk along the border,” your eye might be drawn by the smudges off to the left, or by the white surround and the sense of movement in the white surround.

In my notes: white area with a little falling black squiggle; then other little black details, these somewhere between figures and lines, running on a diagonal from lower left to upper right.

Almost like little embedded panels – as if there is a progress toward the final window.

In the gray an effect of a waterfall down the right-hand side.

A gray patch and a gray triangle make a space between them.

On the right, the softness almost of hair.

An immense variety of texture.

This central black part is strangely flat like a mosaic and also has a lot of depth.

A problem I returned to in looking: the skein in the lower right corner seemed dirty in a way that was familiar. After a while I felt that it looked like an old cobweb in which flakes of dirt have gathered. Hesitatingly, I mentioned this to Tara and she said that for a long time she had been stopping the freight elevator at her studio between floors so that she could study the cobwebs. This – the suspended elevator, webs between floors, painstaking attention to the derelict – could be a sort of parable for Tara Geer’s way of looking. The drawing is a meditation on space. It is full of respect for spiders.