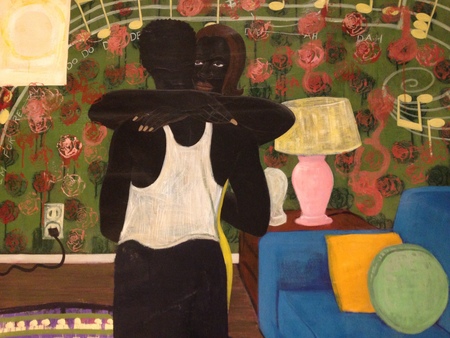 How I have missed this painting, Slow Dance. When I saw it again a week ago the feeling was of relief, yearning, pleasure, a gift. It was up, it was out, for as long as we are not in total emergency shutdown, I can come visit. 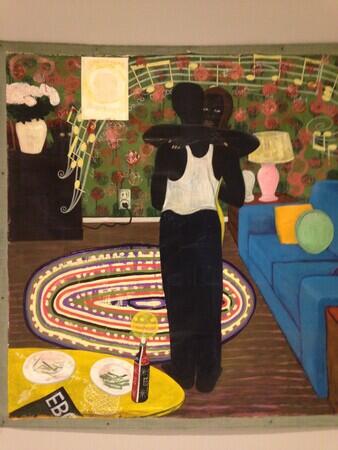 Two figures dance in the middle of a room. You see what might be his back, what might be her face and embracing arms, but there is no need to assume those genders. What you do see is intimacy. Kerry James Marshall says “expectation and doubt.” There is a vimeo interview with the artist about Slow Dance made by the Smart, and it is full of thoughts to turn over in mind.

The room is full of life. There are flowers in a vase in the corner, there is a plant near the couch, there is something that might be dinner on the table, and a candle lit in an ornamented bottle that he says is like the ones used “in Haitian voodoo ceremonies,” there is the edge of a magazine that could only be Ebony, there are roses on the wallpaper, and bright colors in the oval rug, the yellow table, the blue couch with its cushions. 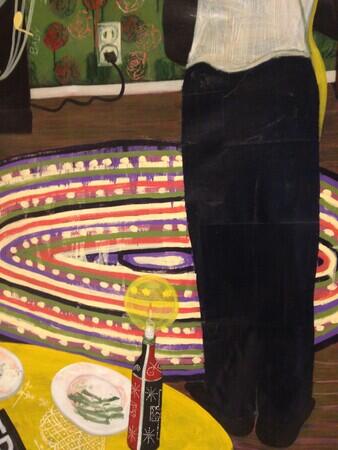 It is between two people, it might be quiet, but there is also a lot of effort in it; someone put a lot of thought into all the elements of the room. “The kinds of forces,” Marshall says, using his own name in its verb form, “you would marshal to try and produce the kind of positive outcomes that you were hoping for…or desirous of.” 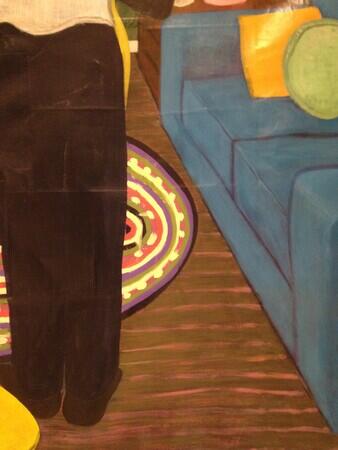 The musical notes are painted, like the ones on the sheet music in George Braque's cubist "Violin and Sheet Music: 'Petit Oiseau,'" (1913) or like the overarching pages up high on the red piano in Jacob Lawrence's wonderful "The Music Lesson" from the Harlem Series, 1943. But here the music itself curls out of the record player in a yellow swoop, it is funny, the music, it is laughing, as Marshall himself does, talking about the song, by Marvin Gaye, the words of which are written under the notes, “Baby, I’m for Re-al.” “People practice deceptions,” Marshall says, amusement in his voice, and tone wry. Our daughter, who is eight and loves logic puzzles, would be quick to spot the paradox, you don’t croon to someone you’re for real, unless… 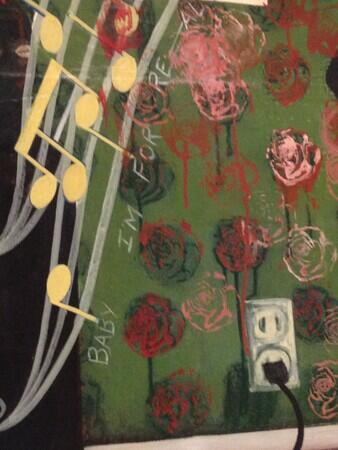 The painting laughs that a painting is only a painting, and is tender about the intimacy and cheer a painting may hold. It is like a Vuillard, with all its patterns making the domestic interior, all its slopes tossing the picture plane casually back and forth. At the time he was working on it, in 1992 and 1993, he wanted to see, Marshall says, “if I could make a painting like I made a collage.” And so he did studies of the dancing couple, because it was important, and of some of the elements, but he never drew the whole thing; the idea was to see if “you would retain some of the kind of dynamism, the kind of vitality, the kind of surprise that you get by just working spontaneously on things.” 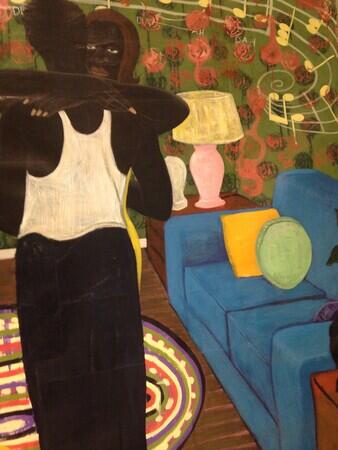 Slow Dance was not a painting I knew I loved before the pandemic. I knew I admired it. I had stopped in front of it many times, and given it a nod of acknowledgement dozens more. I had directed students to look at it. It was the opening picture in the Smart Museum's “Expanding Narratives: The Figure and the Ground” show in 2018. I thought of it as a regular presence, remembered it as part of shows that perhaps it wasn't in, felt I had just seen it. But when I went to write about it for the Frederick Project in the lockdown time, I had only one blurry detail photograph. I felt a caving sense of loss. I had counted on going on thinking about this painting without realizing it, and couldn't until I could see it again.

I took the children to the Smart ten days ago, just for a few minutes in the rain. We walked around the empty galleries of the new and lovely “Take Care” show, and there it was.

“It’s so realistic,” our daughter said. They were ready to leave, but I said I had to take pictures, I had wanted to write about this painting and didn’t have any pictures, and couldn’t, and now I had to. 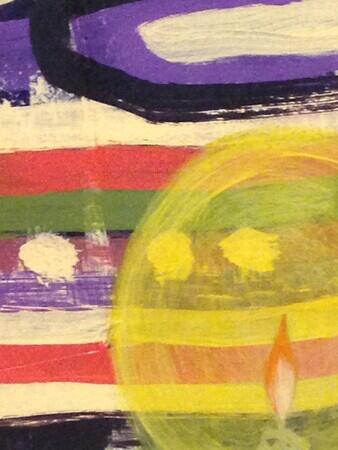 They heard the longing in my voice and they waited. “I think it’s actually on canvas,” said our son, who is interested in materials. And it is, like the kind of canvas a sail would be made from, with gromets around the edge, so that it is unframed and mounted by strings. 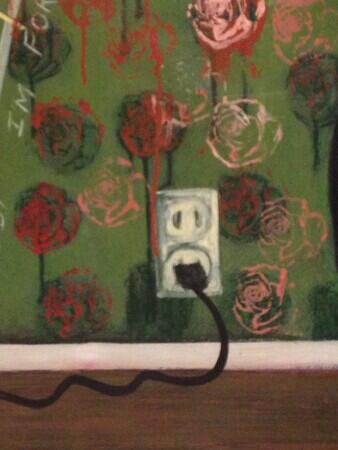 I took my pictures. “What I love about this painting,” our daughter said after a little while, “is that it shows everything. You can even see the music.” And what her tone suggested was that she could, in our dining room at home where she plays the piano, usually see the music, but that no one ever shows it, tangible and visible, like it really is. 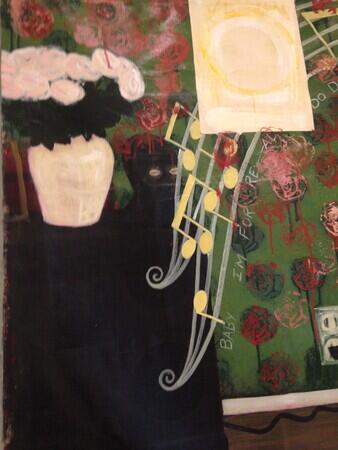 At the Smart, Slow Dance is well lit, and it is beautiful. 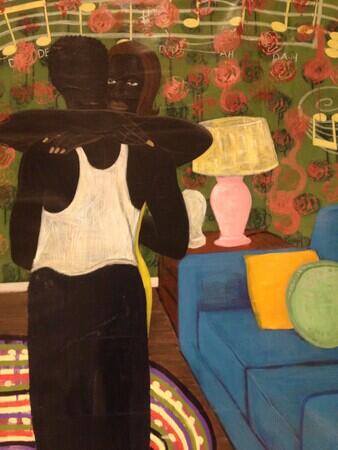