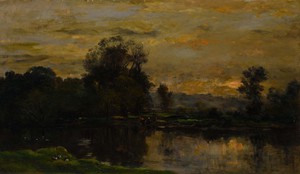 For a long time when I went to the Met with a feeling for Daubigny, I went to the basement.  Although the museum owns thirteen paintings by Charles-François Daubigny, only one was on display, a part of the Robert Lehman Collection, itself displaced during years of construction. The painting was of an evening scene by a river. Across the river were two small figures, women, I remember them as washerwoman. Nearer, and more prominent, a line of dark ducks who swam purposefully toward their evening’s rest.  Nearer still, three birds on the bank, who have already settled. The sky’s tints of yellow and rose, seen again in the river’s last reflective shades make of the whole that tranquility one feels in the evening, lingering in its harmonies before returning home.
The Daubigny hung in a dark area, sort of an alcove made with temporary walls, alongside a Corot, and not far from a surprising Degas of some quite orange rooftops. Sometimes, uncertain about my own pleasure, I would look at the Landscape with Ducks and think 'it's too quiet, too pink,' and point out to myself that there didn’t seem to be a compositional difficulty, a challenge to go on thinking about. At other times, taken with its feeling for life, and the way the sky and space open up as sky and space really do, with a sense of air and moisture and of people and animals moving about, with the power of the yellows and the darkened trees, these questions didn’t worry me.

The seeming easiness of seeing Daubigny is part of the difficulty of seeing him and this has to do with history as much as it does with his gentle, unassuming canvases. He was a part of the Barbizon school, at the time a group of innovative painters (Corot, Millet, Rousseau), who didn’t agree with the Academy that the only worthy subjects were regal men and women in neo-classical poses painted with exacting, lugubrious accuracy. Daubigny was actually the only one among the Barbizon painters to regularly paint outdoors, and he even constructed a barge studio in which he painted while drifting down the Oise, but all of them sketched outdoors and brought the refreshing plein air of nature into their work. These were mentors and models who mattered enormously to the Impressionists who came fast on their heels and, with their more radical innovations, soon eclipsed their Barbizon peres.
The rapid succession of changes made Daubigny and Corot something of a short link in the chain, easy to pass over in favor of what came after. The Barbizon paintings were loved by dilettante American collectors, and it became a badge of honor among the new critics of the 20th century to despise these works. Daubigny himself was overshadowed by the greater scope and popularity of his close friend Corot.
Still, I thought that after the great Corot show at the Met in 1996-7, more interest in Daubigny would soon follow, but he goes on being very difficult to get any sense of. About four years ago at the Musée d’Orsay (which holds nineteen Daubigny paintings), I asked at the information desk if any of them were seeable. The man at the desk seemed somewhat surprised as he paged through the records on his computer to discover that they were all either in the “fonds,” in storage, or loaned out to the regional museums in the French system.  All except La Neige, of course, and that one we both knew well.

The only really prominently displayed Daubigny is his astonishing Snow, sometimes called Winter, painted in 1873, a year or so before his death.  Long a supporter of the Impressionists (he stood up for their paintings at the Academy and introduced them to Durand-Ruel, who would be their gallerist and champion), Daubigny was, as he matured, not afraid to be affected by the work of these younger men.  More than any of their other predecessors, he might fairly be called a late-blooming Impressionist himself, and a few of his late works have a force and power and idiosyncrasy of vision comparable to those of the much better-known Impressionists.
It is hard to convey the impact of La Neige with a reproduction on a screen.  It is a very wide painting, hung low, and it hits you in the chest when you see it. The desolation, and the exhilaration of a winter landscape in the shortest days of the year. The mood like being in a Thomas Hardy novel: you’ve walked all day, your feet are cold and damp. You come upon a great field of crows having their sociable end to the day, calling out news to one another as they step briskly about on the damp ground, landing in the trees they share as nighttime roosts. The sun is almost down and in the thick gray sky, a few clouds are of a sudden lit, a dash of rose. The long stretch of drab white snow, the mud showing through, bits of broken grass, the sense of the road, the heavy talkative presence of the birds, the thick cold sky. No one has ever done this better. And yet we hear almost nothing of Daubigny.