A Shawl for Morisot 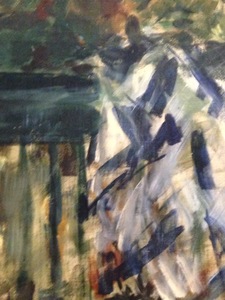 Last summer, the summer of 2018, I was immersed in the work of Berthe Morisot.

I spent three days in Québec City, at the Musée national des beaux-arts de Québec, at the revelatory Morisot retrospective, which I reviewed for Apollo Magazine.

I was one of the critics who called for a reconstitution of our understanding of Impressionism with Morisot centrally placed. I said that scholarship and consideration should be given to Morisot in relation to Manet, Degas, Renoir, and Monet, on all of whom she had considerable influence, both as a painter, and as a close friend. I speculated about shows I would like to see – shows of Morisot and Monet, a show on landscape painting, another on gestural painting; another, A Woman Alone: Paintings by Morisot, Toulouse-Lautrec, Valladon, Manet.

In the year that followed, I saw the Morisot show again, in Philadelphia at the Barnes Collection. The months passed, and, in the back of my mind, I went on with a kind of subconscious labor. It really is hard work to change received notions about significance. I have loved Morisot’s work for years, and sought it out in every museum I can; I have been writing about it in this notebook since 2013.

And yet, it is so engrained in my apprehensions – what is important in a painting, what constitutes a discovery, what I am looking for as I first cast my eyes over a canvas – that I am still just at the very beginning of seeing Impressionism again with Morisot worked through my vision.

This summer, of 2019, there was a show at the Art Institute of Chicago called Manet and Modern Beauty. I reviewed this show for Apollo, too, and saw it five or six times over the course of the summer. The Manet show was many years in the planning, and so it would have been hard for the curators to take account of the 2018 Morisot show. It did not seem fair to criticize this lack in my review.

Nevertheless, I feel a missed opportunity, to let the Manet show build upon what was brought out by last year’s Morisot show. The curators’ choice to focus on lesser known works – Manet’s green garden paintings, his late portraits of women alone, his interest in fashion, the delicate still lifes of his last year of illness – meant that they did turn their attention to the paintings most directly in conversation with Morisot. But this conversation was only acknowledged briefly in one wall text, next to a nude that Morisot had bought for herself at Manet’s estate sale after his death. The show focused on the influence several other women had on his work, women with whom he enjoyed conversation, whom he painted, and to whom he sent lovely illustrated letters. But what of one of the geniuses of the period, who was his sister-in-law, and whom he saw sometimes daily, whose paintings he owned and valued, who had painted next to him for nearly fifteen years, and whom he had painted fourteen times? Surely his ambitions in these greener domains had to do with his relationship with Morisot?

I think it might be interesting to get all the way down to the fine grain of looking at one painting, to see if I can bring out what it would be to see Manet with Morisot in mind. I am trying to give myself the consciousness of someone who, as a child, had always seen Morisots displayed prominently in important museums, had always been told that the freedom of her brushwork was one of the great achievements in the history of paint, one that had opened the gates for gestural abstraction in the 20th century.

At the Manet show, I round a corner and see this: 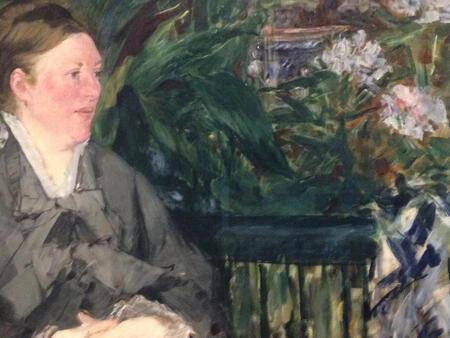 And the first thing I think, is ‘look at that shawl on the right, that is pure Morisot.' That is just the way that she gets volume by feathered strokes of white – the rush and power of a swan. 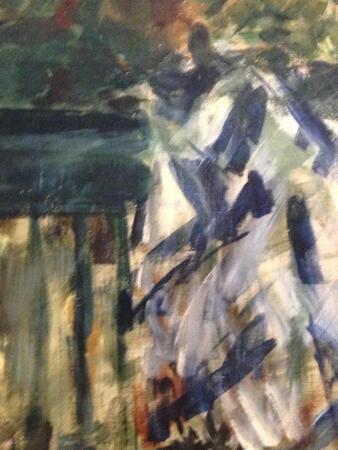 I look at the date, signed and dated by the artist in 1876, but, because of a complex set of different historical accounts, considered by curators to have been worked on in the range of 1876 to 1879. Suzanne Manet was a pianist, from the Netherlands. She kept this portrait for herself, and it was not displayed publicly. Eventually, in 1895, she could no longer afford to keep it, and she had to sell it.

Édouard Manet would already have thought of Morisot as a virtuoso of white. Some years before, she had given him her painting of 1869, The Harbor at Lorient, with a woman seated on a stone wall, dressed in white with touches of dark blue. In 1876, beginning this painting of his wife, stopping by Morisot’s studio, which was the center room of the family home, a studio that he saw both because he paid attention to her work, and whenever he went to see his brother, he could have seen The Mirror (1876) taking shape: 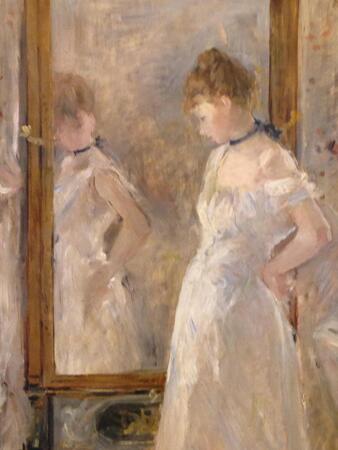 He would have seen her white cloths over a long fence, in Hanging the Laundry Out to Dry, from the previous year, of 1875, 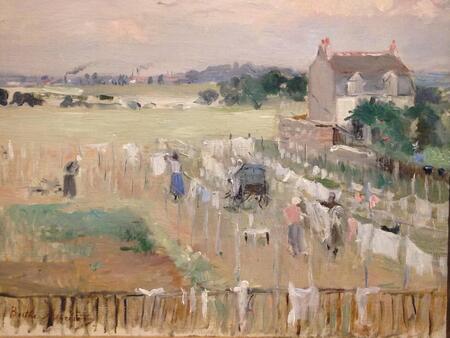 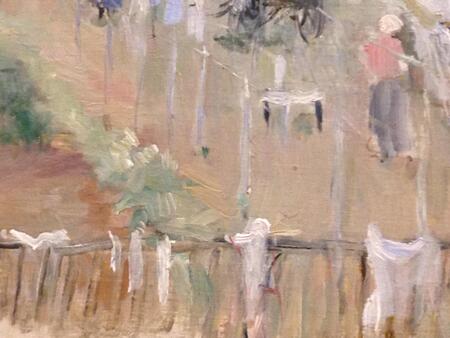 Perhaps his eye would have been caught by these two girls, from a painting done in England, also in 1875. She often intermingled white with blue around children, and the waists and necks of women: 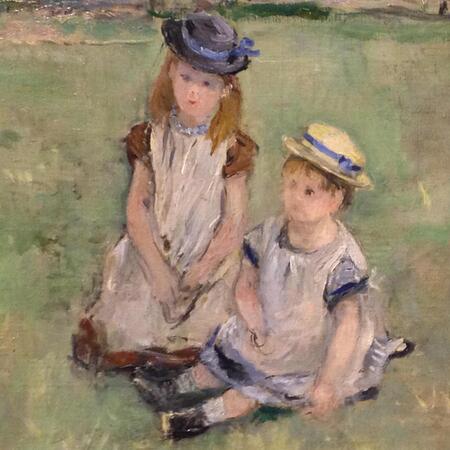 He would certainly have known this 1875 portrait, In England, of his brother looking out the window. 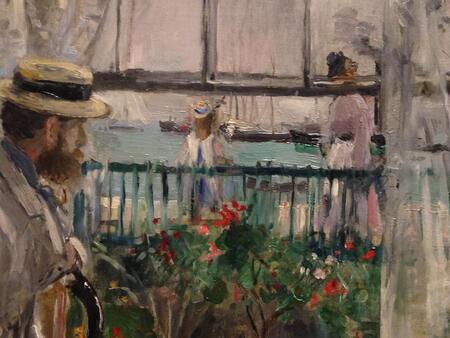 How related their two private paintings are: on the left, loved spouse; dark green connecting rail – of a window, of a bench – ; white effusion on viewer’s right.

Manet had a wonderful eye, and he knew what to borrow. In that white scarf or shawl thrown over the back of the green bench, he interlaces a deep many-shaded blue. It was as if he saw it and tossed it off, a magnification of what Morisot was already doing and would do more of. This combination was, and would go on becoming, one of Morisot’s most characteristic – she would use them again and again – her own complex white, with touches of that deep bright blue. 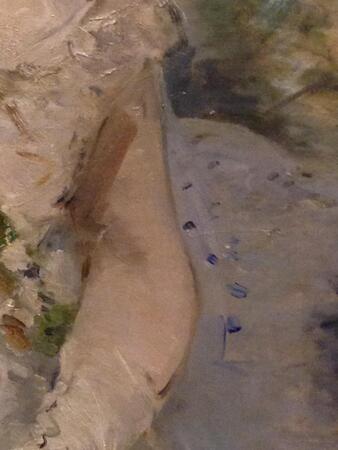 Her daughter, Julie Manet, daughter of the painter Eugène Manet, niece of Édouard Manet, uniting three painters, painted here with her nurse, in 1880. 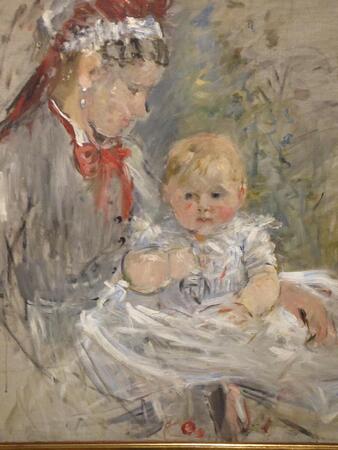 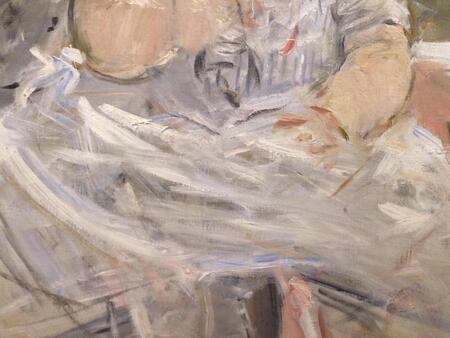 The shawl Manet painted is a record and a prediction, and it is a guide for looking at Morisot's work, and for how he looked at it. It is as if it were Morisot’s shawl, perhaps she left it visiting one day, that he has included as a part of the portrait of his own talented wife. Four adults, three painters and a musician, their private thoughts and the world they shared.

When she painted Serving Girl in 1886, her brother-in-law had been dead for three years. She had thought so much about it -- there it is, pooled again, above and beneath the woman's feet. 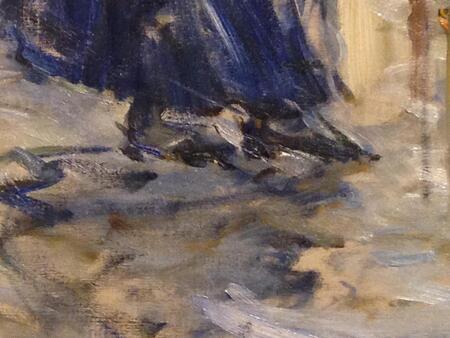