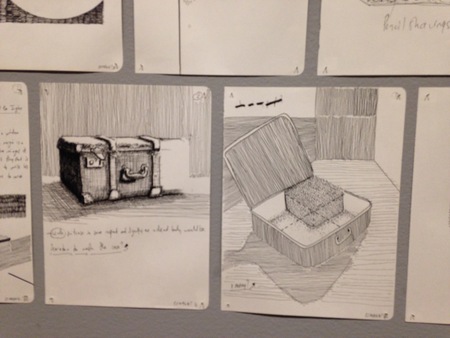 Late in 2016, when we had been living in Chicago for about six months, I went to the Art Institute, and wandered into a show of works by Kemang Wa Lehulere, who is from Capetown. The show was called In All My Wildest Dreams and was curated by Kate Nesin. [All photos are from the exhibition, I don't have titles for all the pieces.]

In the first room there was a large installation. Old, small brown suitcases, some open, some closed. Cut pieces of green artificial grass. Porcelain dogs, something like German shepherds, but quite small, and with inquisitive faces. Some were seated inside the suitcases, some next to on the floor. The wall behind looked like a huge blackboard, and drawn in chalk on it was an enormous old-fashioned pencil sharpener, with an intricate chalk pattern underneath. 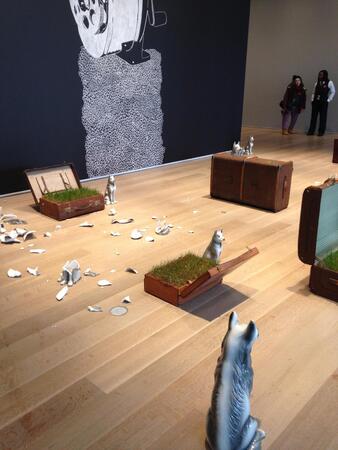 Why was this so immediately coherent?

Behind the chalkboard wall, on the other side, were three tires with crutches. 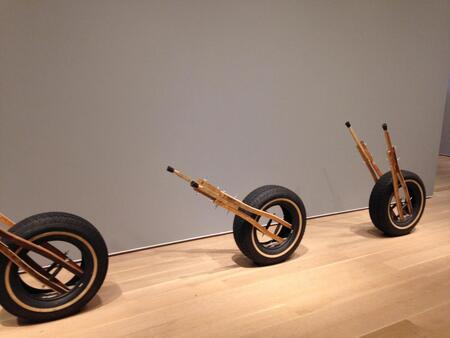 Again, these were as clear as a very good schematic drawing of how a machine works, but as clear about what?

In the corner, a kind of wooden house with a taxidermied African gray parrot installed in it. A tape loop was playing of a fairly deep voice, probably a woman’s, reading some kind of school instruction. The wood, like the wood in many of Wa Lehulere’s sculptures, is taken from old school desks. Thoughts about education run through his work. 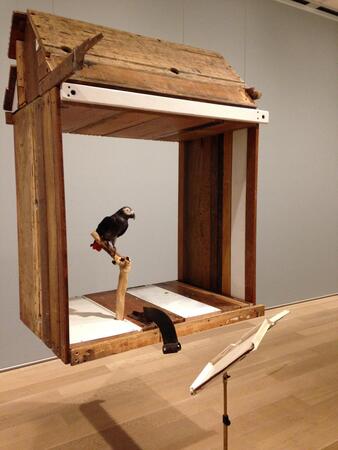 Other pieces were drawings of large size musical notation made from human hair. I didn't photograph those. I took some pictures of other drawings made in pen and ink. 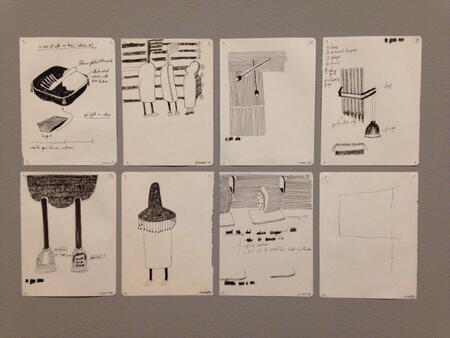 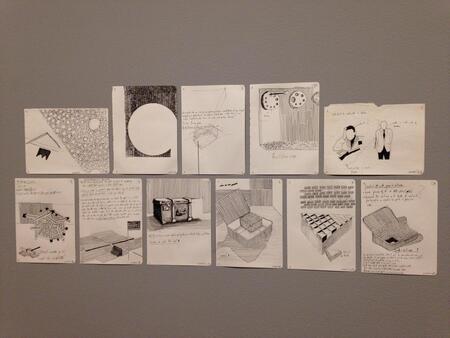 A central piece, in the last room, was a film of a performance piece on a large wall-size screen with a couple of chairs in front of it that gave a viewer an uneasy invited feeling of some kind of theater that was also an interrogation room.

The exhibition as a whole was made of many different materials – drawings, sculptures, found objects, performance piece and documentation, preparatory sketches, polaroids, a handwritten letter to the Nobel Prize committee – at the level of the show, too, it was striking that these all felt like they were obviously aspects of one person's artistic imagination. 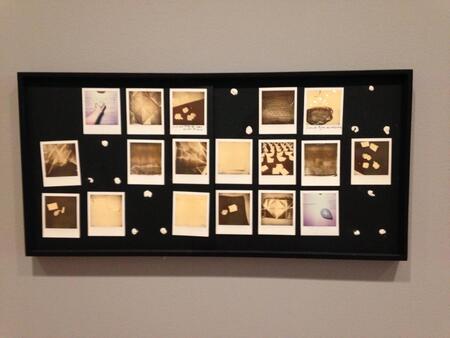 For a piece in the New York Times at the time of the Chicago exhibition, Wa Lehulere spoke with Roslyn Sulcas. “Performance frightens me because I am a very shy person,” he said. “But it also incorporates so many previous experiences.” Very thin layers, then, a person’s experience like layers of chalk on a school chalkboard, worked, worked, erased, worked.

How would I define this sensibility? Schooled. Aware of institutions. Oriented toward symbols, but obliquely. Sense of carpentry – plumb, adjoined. Historical and detached.

The use of materials is so settled. After long consideration, I choose this.

Wa Lehulere’s gallery in South Africa is Stevenson Gallery. Lerato Berang, of the Stevenson Gallery, for the same piece in the Times: “He collects materials both physically and conceptually and let’s things unfold,” the gallerist added. “I never know what the form of a Kemang work will be.” But, the unsaid following sentence, it will always recognizably be a Kemang work.

I have some thoughts I would like to collect – about Es’kia Mphahlele and schooling in South Africa, about the Meleko Mokgosi show recently held at the Smart Museum and the role of dogs in South African history, about Joseph Cornell and theatrical collage – but I will have to try to take that up another time.

I went to Capetown once, in 2000; Wa Lehulere would have been about sixteen then. I was traveling with a man who had grown up in Zimbabwe and who had friends in Capetown. We went up to Table Mountain, which is a sort of symbol of the city. It is quite level and flat, hence its name. During the day, a mist collects and hangs over it; the people who live in the city call this the Table Cloth. I remember the feeling of the mist and the look of the patchy grass, the sense of clarity looking down, detached but not removed from the city, a sense that the name was exactly right, though I didn’t know why.