At Nadar's (but he was already gone) 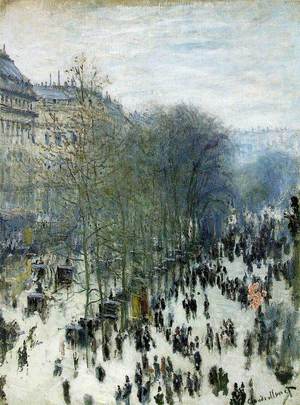 Possibly it was somewhere in two decades of reading and rereading Susan Sontag’s On Photography that I absorbed a small but suggestive misimpression.  In the midst of a passage on the relationship between photography and painting, she devotes a long footnote to Impressionism.  This footnote begins, unexceptionably, “the large influence that photography exercised upon the Impressionists is a commonplace of art history.”[i]

Rereading the rest of the footnote I see, as is often the case with Sontag, that I have been thinking about what it contains for a long time without even remembering that she wrote it, and that I will probably now spend many more years arguing with myself about the details she’s included in what is for her a brief excursus.

Here is her summary of what the Impressionists found in photography: “The camera’s translation of reality into highly polarized areas of light and dark, the free or arbitrary cropping of the image in photographs, the indifference of photographers to making space, particularly background space, intelligible…”  This was the “inspiration for the Impressionist painters’ professions of scientific interest in the properties of light, for their experiments in flattened perspective and unfamiliar angles and decentralized forms that are sliced off by the picture’s edge.”  Sontag, magpie, quotationalist, admirer of Benjamin, points out that Stieglitz said of the Impressionists, “they depict life in scraps and fragments.”

And here is what led me astray, though, as I work this through, I’m beginning to think that the clarification of her small error of suggestion might actually affirm the rest of what she’s said.  The footnote comes to the following too-irresistible conclusion: “A historical detail: the very first Impressionist exhibition, in April 1874, was held in Nadar’s photography studio on the Boulevard des Capucines in Paris.”

This information, too, is a commonplace of art history, and if I first saw it in Sontag I’ve since seen it referred to often enough that when I began to think of keeping this notebook I pictured an essay depicting the scene. It was to be an exciting set piece: one after another the soon-to-be-famous painters would enter the studio, so full of potential. There they are, gathering around the far-seeing Nadar, who loves their work, and says 'you must have the show here,' generously taking down his photographs.  They hammer, they arrange curtains, they call out to one another.  I knew that the name of the movement came from this first exhibition.  Perhaps Nadar himself, watching them at work, had said something that suggested the name...

Not so, not quite so, at any rate, and in a way that matters.  A recent, thorough biography of Nadar by the French writer Stéphanie de Saint Marc makes almost no mention of the Impressionists in general.  The only one that Nadar really knew was Manet.  The biographer says Manet inspired Nadar as a model.  She has a heavy description of the famous photograph: Manet’s fine features and “romantically undulating chevelure” made a “counterpoint” with the hand “robust, almost peasantlike” seen in the picture’s foreground, on the back of a chair.[ii] Nadar, Édouard Manet, 1863
This friendship, though, doesn’t account for the presence of the Impressionists at Nadar’s studio because, as is well known, Manet resolutely did not show with his friends in the 1874 exhibition; he was still fighting it out with the official salon.  (I’ve often taken a kind of, probably unfair, satisfaction in Manet’s absence from the show. His works seem to be obdurate where those of the other painters are fluid, though I do recognize that this is yet another of my difficulties with seeing Impressionism, as somehow what they saw in him led to what I see in them.)

In any case, I now hurried to John Rewald’s History of Impressionism to read the chapter on the April 1874 show.  The painters formed themselves into a group, not at all impromptu, carefully thought out and argued over, with the financial structure of a joint-stock company (Pissarro’s idea,) and a deliberately un-school-like name: Société anonyme des artistes peintres, sculpteurs, graveurs, etc. (Renoir’s idea.)  Though the name Impressionism did arise from the show, it did so in a roundabout, emergent way, not because of a stroke of impressarial brilliance on the part of Nadar.

The name came about through an odd mixture of the offhand, the laudatory, and the vituperative.  The catalog of the exhibition was edited by Renoir's brother, Edmond Renoir. Edmond Renoir remembered, in his unpublished recollections, that when he came to the group of pictures Monet had sent he was irritated by, "the monotony of his titles: Entrance of a Village, Leaving the Village, Morning in a Village...."  Edmond Renoir objected and "the painter calmly told him: 'Why don't you just put Impression!'"[iii] A painting of Le Havre was called Impression, Sunrise, and critics, both the rare ones who liked the show, and the much more common ones who vied to outdo one another in piling up ridicule, seized the name “Impressionists,” which the painters themselves accepted as close enough.

They weren’t hanging around Nadar and excitedly studying his photographs; they simply needed a space. According to Rewald: “This presented itself in the form of the studios vacated by Nadar, who, according to Monet, lent them the premises without fee.”[iv] Nadar’s biographer confirms that at this period, though he no longer maintained a studio there, Nadar still sometimes sublet the premises.  He was fairly friendly with the group of painters, whom he saw now and again at the café Guerbois, but, she says, he stayed “hermétique” with regard to their innovations.  He was a fervent admirer of Daumier and Guys – both dear to Baudelaire – but never collected the painters who were to become even more fully the "painters of modern life," as Baudelaire had described Guys in the long essay in which he envisioned a kind of painting.

Baudelaire did write perceptively and admiringly about Manet, a figure with one foot in that earlier generation, and one reluctant foot in the Impressionist camp. But this earlier generation hardly threw themselves into promoting the new way of seeing made explicit in the pictures of Monet, Pissarro, Renoir, Sisley, Cézanne. Nadar may have known that the artists were penniless – if he lent them the studio for no charge that was a helpful generosity in a time when few were helpful to them. What the gesture meant, though, wasn’t that the buoyant, insightful, commercially adept, scientifically inquisitive Nadar saw the future and passed the mantle on to his comrades. The show was in a place left empty by a great, declining photographer of the previous generation.

What I’ve been thinking about today is that it may be that the complicated relationship between Manet and the younger Impressionists, which has a strong bearing on the relationship between the movement of Impressionism and photography, could be expressed by these two now slightly refined facts: Manet was the friend of Nadar’s; the others got themselves named when they had a show in Nadar’s empty studio without Manet.
[i] All Susan Sontag quotes from On Photography, New York: Farrar, Straus, & Giroux, paperback 1989, p92.
[ii] Stéphanie de Saint Marc, Nadar, Paris: Éditions Gallimard, 2010, p203.
[iii] John Rewald, The History of French Impressionism, New York: The Museum of Modern Art, 1973. Rewald is here paraphrasing and citing the unpublished recollections of Edmond Renoir, p318.
[iv] Rewald, p313.
photographySontagPissarroRenoirMonetManetStieglitzNadarRewald