Jeff Donaldson and Miles Davis: Report on a South Side Mood 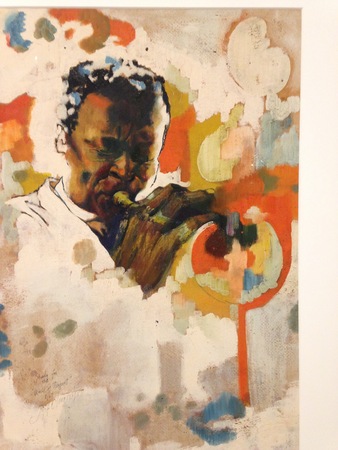 Today I just want to report on a mood that the children and I happened into around 5:30 yesterday afternoon. A beautiful mood, such as I have never encountered before, fine and distinct.

The children and I found the mood at Lake Michigan on Promontory Point, which was open yesterday for the first time in nearly three months. We got word from a friend that it was possible to go. We rode our bikes down around 5 in the afternoon. It was a beautiful Sunday afternoon and there were other people and families making their way through the one open tunnel and over to the familiar walkway that makes a circuit around the point, taking you out to the edge of the crashing waves, the view of the endless lake, the distant city sky-line.

“I’ve missed the lake so much,” S, our daughter said, when we came out of the tunnel and felt the air, the lake air. We passed a father and three small children walking together – the father was wearing a shirt that said “I Can’t Breathe,” a face-mask that said “Black Lives Matter.” He and I exchanged a hello as we shepherded our children among one another.

We rode out to the end, chose a place slightly on the northern side, where we could see the sky-line, too, clumped our bikes together and scrambled down the steep wall of rock ledges to where the water was churning. We took off our sandals and put our feet into the cold water.

The people who sit on the rocks at Promontory Point always look like our part of the city – most are Black and Brown, and there is a great sense of variety and of openness that is the understood shared atmosphere of the Point.

Yesterday, the light was exceptional – a clear perfect day, the mid-70s in June. And the lake, which is always a blessing, but which we, and all who sat there, knew, with a tremendous sense of reprieve, beneficence, grace, knew for the blessing it is.

During the time we sat there, we all kept respectfully at least six feet apart, more than that really. Far up at the eastern edge of the point, a couple talked earnestly together. There was a group of younger people, perhaps five of them, of different backgrounds, sitting up on the rocks and talking together and making little trips down to the water’s edge. After a while, a young woman, who could have been Latin American or Middle Eastern or South Asian, with wavy hair down to her waist, came down and sat on one of the square blocks of stone not too far from us. Sat very erect and still, meditating on the water, and then lay down with her face to the sun. There was a family, two parents and a small girl who came to the top edge of the rocks. I thought she was speaking Russian to her daughter, the father spoke French. Two men, young, friends, speaking Arabic, I think, sat on the top ledge for a while, and moved on. Another couple, both wearing braids, arrived and sat laughing together.

The children and I perched on the edge of the rocks with the planes of water swirling around our feet, watching the waves crashing against the rectangular stone blocks that are set out as barriers. The sun was starting to decline in the sky, and there was a yellowish-white haze at the horizon. We took deep breaths. At one point I moved to leave, but they needed and wanted to stay, and we stayed.

Some of the people walking around the Point had been at the protests. I saw a woman in a t-shirt that said “Legalize Being Black.” There was the thin, fine sense that the protests are working. We could think of the yellow Black Lives Matter letters running down the center of Washington DC, there had just been the news that New York City would reduce police funding, Colin Powell had come out against Trump. Later that evening would come the news that Minneapolis was going to dismantle its police force. In our city, after several days of peaceful protests, the curfew had been lifted. Earlier that day, on the South Side, a large protest had distributed 1,000 meals to people in the neighborhood who were having trouble accessing supplies of food and medicine.

The light over the understanding lake around us and beyond us, it had been there so long, was transcendent.

Before you read the rest of this, open a new window for the linked album title at the end of this sentence: Miles Davis’s album from 1968, Miles of Sky.

The mood from the lake, or something very near to it, is in the first track, “Stuff,” for which Davis was the composer. Then come back.

This is a sketch of Miles Davis made by Jeff Donaldson in 1967. It is made with oil and mixed media on heavy cream paper. 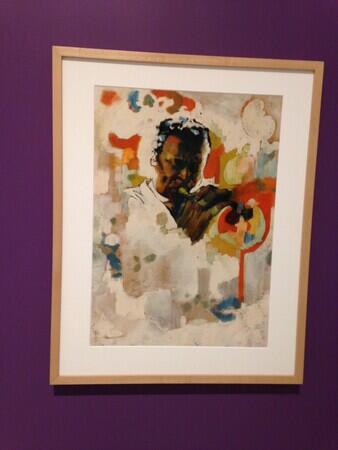 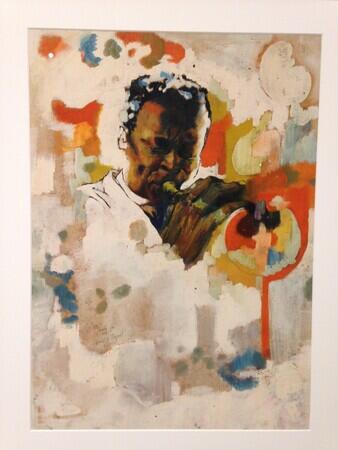 This oil sketch belongs to the Block Museum at Northwestern University and was shown at the Smart Museum of Art as part of their important exhibition The Time Is Now: Art Worlds of Chicago’s South Side, 1960-1980.

When Donaldson made this portrait in 1967, there were already insurrections in US cities. It was the year before 1968, when Miles Davis returned to writing music, and Dr. Martin Luther King was killed, on April 4th.

One track of Miles of Sky, “Paraphernalia” was recorded in January, and it sounds quite different than the other three tracks, which were recorded from May 15-17th of 1968. “Stuff” was laid down in the last of these sessions on May 17th. 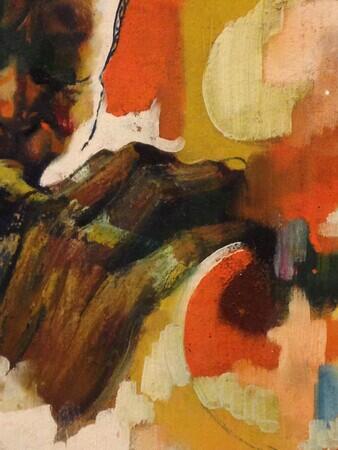 I am so glad I took this detail picture. The man’s face. The horn he plays. The yellows and deep oranges. The hand with its knowledge. The negative space, gentle and beautifully defined, between his face and horn and hand. 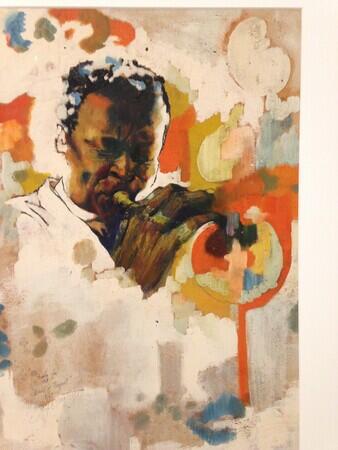 And I am glad I took the whole picture, too. The clouds of light and sound. I saw this work of art in 2018; it looks different this morning, now that it, and the mood of yesterday, on the rocks by the lake, and the sound of Miles of Sky are associated together.