Robbed at the Arena Chapel 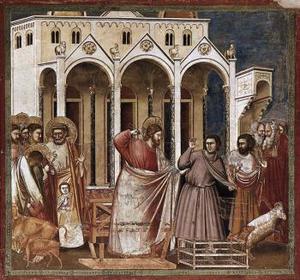 Giotto, The Expulsion of the Money-Changers, Arena Chapel, Padua

What was stolen were my minutes, fifteen of them. I’d been under the mistaken impression that for my twenty-seven euros – thirteen each for me and for M., one for the baby – we were to be vouchsafed half an hour in the presence of one of the greatest fresco sequences in the western world. I knew that we were to spend fifteen minutes cooling down in an air-conditioned portal prior to being allowed entry to the sacred place, but I counted on half an hour to try to snatch a few glimpses of Giotto’s eternal understanding. The bell, though, rang after fifteen minutes.

The whole thing of course is absurd – each panel, and there are dozens, ranks among the greatest paintings we have – any one could be profitably studied for many half-hours. For how long is it right to contemplate Giacchino asleep with the angel curving down his vision and the shepherds, still and aware? Five minutes tracing the steady tender robes of the figures presenting the baby Christ at the temple would not be wasted. Nevertheless, there would be a settled internal logic to spending fifteen minutes in general awe and survey and a further quarter of an hour in contemplation of a few moments. Robbed of this latter experience I could hardly feel that I had seen the paintings at all.

“Cynical,” M. said after we had left; they had simply given up on whether their visitors would have a real experience of the paintings and focused on how to get a maximum of funds in short increments of time.

But then again, in another way, one does apprehend the greatness of Giotto almost instantly. What Giotto founded for the next eight hundred years of art to struggle with was the sense that his figures existed, feet on the ground in front of us, in time. He was the master of significant form. As Bernard Berenson rightly pointed out, Giotto’s genius was for significance, for what would read immediately:

With the simplest means, with almost rudimentary light and shade, and functional line, he contrives to render, out of all the possible outlines, out of all the possible variations of light and shade that a given figure may have, only those that we must isolate for special attention when we are actually realizing it. This determines his types, his schemes of colour, even his compositions.… Obliged to get the utmost out of his rudimentary light and shade, he makes his scheme of colour of the lightest that his contrasts may be of the strongest. In his compositions he aims at clearness of grouping… Note in the [picture] we have been looking at, how the shadows compel us to realize every concavity, and the lights every convexity, and how, with the play of the two, under the guidance of line, we realize the significant parts of each figure, whether draped or undraped… Above all, every line is functional; that is to say, charged with purpose… Follow any line here, say in the figure… kneeling to the left, and see how it outlines and models, how it enables you to realize the head, the torso, the hips, the legs the feet, and how its direction, its tension, is always determined by the action.  {Berenson, Bernard, Italian Painters of the Renaissance, vol. II, New York: Phaidon, 1968, 6-7.}

Rendering his figures in time, Giotto gives the wondering viewer the sense of freshness, of “just now.”

On the way art has for many centuries mediated relationships between time and money there is of course much to say. (I tried to say something about this in a piece for The Believer, at http://www.believermag.com/issues/201211/?read=article_cohen). A few things, though, come directly to mind. The Arena Chapel, famously, was commissioned by Enrico Scrovegni, who was known to practice usury, which was at that time prohibited by the Catholic Church. When Giotto undertook the commission, around 1300, it was understood that the family chapel was to be a sort of lavish expiation. Giotto’s friend Dante, who admired the chapel greatly (and who, one feels sure, spent more than fifteen minutes engrossed there) mentioned Giotto in the Divine Comedy and also had Enrico’s father, Reginaldo, as the head of the usurers in the seventh circle of hell. On the chapel’s great fresco of judgment toward the bottom the figure of Enrico Scrovegni offers up a painted maquette of the chapel in which the viewer is standing.

There is an alchemical irony in the fact that Giotto’s act transmuted Scrovegni’s gold into something as nearly eternal as the individual human being can manage and that that divinity is now changed back, by latter-day Scrovegnis, into gold. I wrote, in “Gold, Golden, Gilded, Glittering,” of how, just around 1300, time began to be measured incrementally, of how this was part of the understanding of purgatory, only incorporated into church doctrine in the 13th century, and then given masterful form by Dante. Purgatory creates a passageway between heaven and hell through which you can move step by step in both time and money. And the incrementalization and measurability of time was also very useful in building the practice of usury – which calculates how money will grow, from itself, over time.

All this, which I spent years studying, was in the background of my aggravation when the bell rang at the Arena Chapel. But what’s really caught my mind in the days since is the relationship between my feeling about time and my feeling about money – captured, I think, in that complex word, “to spend.”

“To spend,” derives from the Latin expendere, “to weigh out money, to pay down.” (The tangibility is interesting in the old word, from a time when money had a specific gravity.) Expendere was generally borrowed by all the Germanic tongues and became in Old English spendan (with forspenden meaning “to use up.”) As explained by etymonline, “In reference to labor, thoughts, time, etc. attested from c.1300.”

It is interesting that, in one of those cosmic shifts of understanding that periodically encompass the globe, at precisely the moment Giotto was painting the ground on the Arena Chapel, in English people began to spend time. But, at least in my ears and usage, in the phrases “I spend time,” and “I spend money,” the “spend” is not congruent. The difference becomes more evident as quantities and further objects are adjoined. “I spent a lot of time with the painting.” “I spent a lot of money on the painting.” It is absolutely clear that in the first case the net result is an augmentation and in the second a depletion. Time is not money. Time spent is something gained. Even wasting time has more so to speak profit in it than wasting money.

In some profound sense, one understood, I feel sure, by every figure in the Arena Chapel, my time is not my own. And not just because it is borrowed from some person or deity to whom it really does belong but because it is that in which we all live and move. It is the awareness of the movement of time that makes significant form possible. Lines and significance are drawn out, corporeal existence has its structured purposes, in time. And, even though the time in which we move cannot be ours, ironically I think it is only when time bears this relationship to significance that we can feel that time has been stolen from us. If I look at a carved wooden Madonna from 1100, my heart full of rebellious fury at how my father, dead at sixty-seven, was robbed of his time, that Madonna looks on incomprehendingly. But all the people in Giotto – the sleeping guards, the Madonnas with their hands outstretched, the Judas and the woman who look on – all of them, they know.